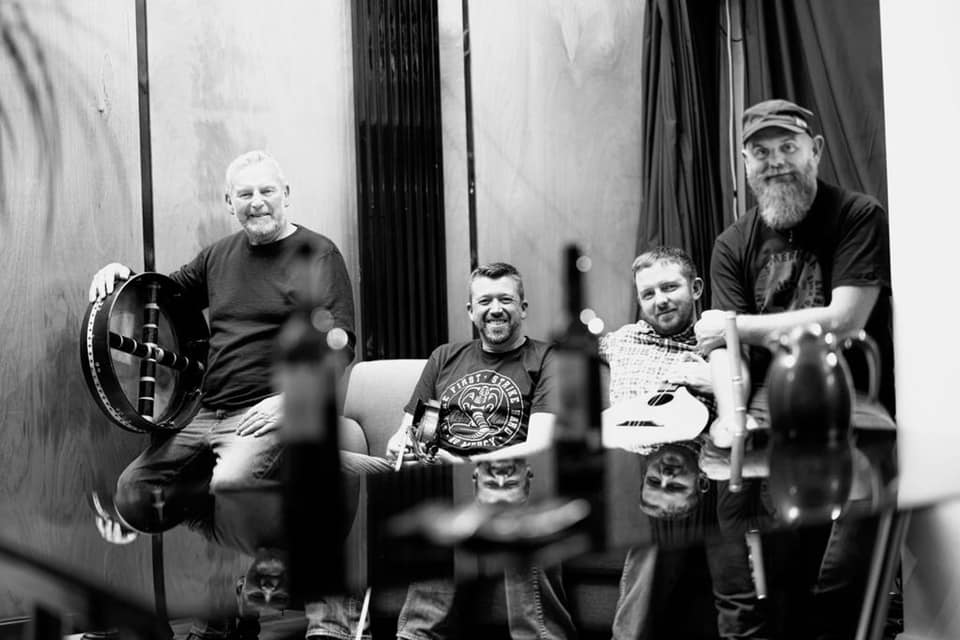 Good Morning to Your Nightcap – “Stirred And Waked Anew”

‘Stirred And Waked Anew’ follows Good Morning to Your Nightcap’s eponymous recording released in 2015. This album is a collection of music reflecting the musicians’ personal influences featuring tunes and airs from Ireland, with forays into the music of Shetland, Denmark and Austurias. Tracy O’Donnell guests on the album providing stunning vocals on the songs ‘The County Tyrone’ and ‘An Bonnán Buí’; indeed, the album owes its title to a line from An Bonnán Buí. As Desy, Ruadhrai, Ryan and Paul were brought together musically in the shadow of Cavehill, in North Belfast, it is entirely fitting that Cavehill’s familiar outline features prominently on the album cover welcoming in a brand-new dawn.

Musicians:
Desy Adams (flute) was born and bred in Belfast, Co Antrim and is a fine exponent of the Northern style of flute playing. Desy started playing tin whistle in the 1980s before moving onto the flute. He spent time living in Denmark and Galway before returning to Belfast in the early 2000s. Desy played with traditional group Na Dorsa with whom he recorded a CD in the late 1990s and has also featured on the Wooden Flute Obsession CD. Desy has toured and played at many festivals throughout Europe and America.
Ruadhrai O’Kane (fiddle / viola) comes from Dungiven, Co Derry and has lived in Belfast since going to university in 1995. Ruadhrai played fiddle with the traditional music group Óige for around 10 years up to 2001 recording 3 albums and touring extensively throughout Ireland, UK, Europe and beyond. More recently Ruadhrai enjoys playing in sessions, teaching fiddle workshops, and has appeared at various European festivals.

Ryan O’Donnell (banjo / bouzouki / guitar) hails from Omagh, Co Tyrone and has been accompanying traditional music since the age of 11 on guitar, piano and bouzouki. Ryan is a much sought-after accompanist with a style noted for providing a steady and musical foundation behind the tune. He is also a fine banjo player and features on several tracks on this recording. Ryan performs at sessions and festivals throughout Ireland and has appeared on over 10 recordings in the last 15 years.

Paul Maguire (bodhran) is a Belfast native who is well known within traditional music circles. Now retired, Paul spent several years in his youth traveling the high seas exploring faraway lands which developed his appreciation for music and culture. Paul has played the bodhran for over 35 years and is a veteran of many fleadhs and festivals. Paul has a very distinctive, unique playing style and has developed an equally unique knack for staying up late, so he doesn’t miss a trick!

Guest Musician:
Tracy O’Donnell (nee Ryan) (vocals) comes from Newport, Co Tipperary and began learning music at the age of 10 with well-respected female musician of Co Limerick, Peg Ryan. Tracy has taught flute and whistle in her local area for many years and returned to full time education in 2010 completing a B.A. in Irish Traditional Music & Dance at the University of Limerick. Tracy has travelled to Europe and America over the years with various groups and has recorded on several recordings including Denis Carey’s ‘Newport Town’ and on Stevie Dunne’s ‘Banjo’ album.