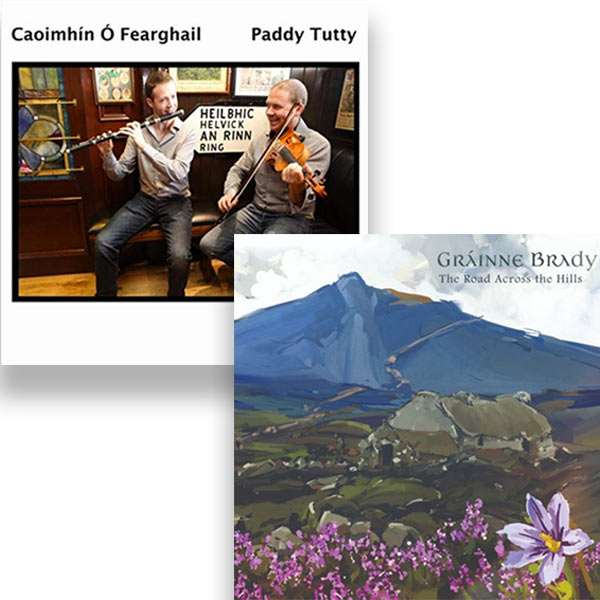 8pm
Gráinne Brady
“The road across the hills”

Gráinne Brady is a fiddle player from Co. Cavan. Currently based in Glasgow, where she works as a professional musician, Gráinne plays in a variety of different bands including MG Alba Scots Trad Awards nominees Top Floor Taivers, string group The Routes Quartet, and Gaeilge/Gàidhlig supergroup LAS.

Gráinne’s debut album is the first part of a project on Irish immigration in Scotland, a country to which many Irish came to seek work over the last few centuries. With all music composed by Brady, ‘The Road Across the Hills’ will act as a soundtrack to the novel ‘Children of the Dead End’, the unofficial autobiography of Donegal poet and writer Patrick MacGill.
Born in Glenties in 1889, MacGill emigrated to Scotland in the 1900s, and with barely an education, he began to discover his talents as a writer whilst working as a labourer on the railways in Glasgow and as a navvy in Glencoe. His writings reflected on his growing preoccupation with the poor, the downtrodden and the workers who, like himself, toiled in the mud to build civilisation but lived on the outside of society.

With themes of immigration and extreme poverty, each track on ‘The Road Across the Hills’ was written in response to pivotal moments in the novel; a book that has stuck with Gráinne since first reading it as a child. Entwining the musical tale are excerpts from MacGill’s poetry, acting as a reflection upon the story, adding even more depth to the soundtrack.
The music will take the listener on a journey; from MacGill’s childhood in rural Donegal, to gruelling labour in Scotland, as a potato picker, or ‘tattie howker’, labourer and navvy, with some colourful characters along the way, as well as a bittersweet story of love and loss. The story speaks for the outcasts in society, the labourers, navvies and waifs. It speaks for the Irish immigrant. It depicts the hardships endured by both the Irish and Scottish lower class in times past. The music delves into this world, whilst highlighting the enduring hope that drove such determination to succeed despite the odds – an enduring concept just as relevant today in the discussions around immigration as when MacGill was writing.
Although Gráinne moved to Glasgow from Ireland in a much more enlightened time, the compositions are not only inspired by this tale but are also a reflection of her own musical journey over the last few years. Joining Brady for this performance will be Sam Mabbett (accordion), Michael Biggins (piano) and Paul McClure (bodhrán).

“How welcome it is to be asked to endorse such a quality fiddle and flute album as this from two young Waterford musicians who can hold their own with any present or historical flute and fiddle combination.
Attractive, effortless and well chosen pieces make this recording a welcome companion to the collection of any follower of quality music. I was sent five or six tracks and found myself demanding more.
Congrats Paddy and Caoimhín on such a fresh respectful approach to our traditional music”.