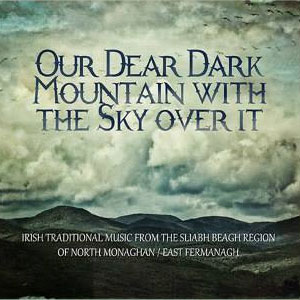 Described as “a fascinating musical project … beautifully rendered” by Irish Echo columnist Dan Neely, ‘Our Dear Dark Mountain with the Sky Over it’ is the musical culmination of PhD research by Téada member, Seán McElwain.

Among the collections from which this recording draws, are those of James Whiteside. Described by Capt. Francis O’Neill as “genius” in equal parts ‘scholar, poet, musician and composer”, Whiteside’s collection of music, which in the estimation of Leo Rowsome represented  “a great asset to the Nation”, is explored for the first time on this recording.

“A fascinating musical project … beautifully rendered … the reflection of a musical community rallying around and exploring a shared and underrecognized identity” (Dan Neely, Irish Echo)“Our Dear Dark Mountain with the Sky Over It has a charm and depth that’s incomparable. It’s easy to hear the musicians’ emotional attachment bursting through on this very important collection.” (John Carty, TG4 Musician of the Year 2003)”Musically it is a revelation and could quite easily become album of the year … An outstanding recording of traditional music.” (Tony Lawless, TradConnect)