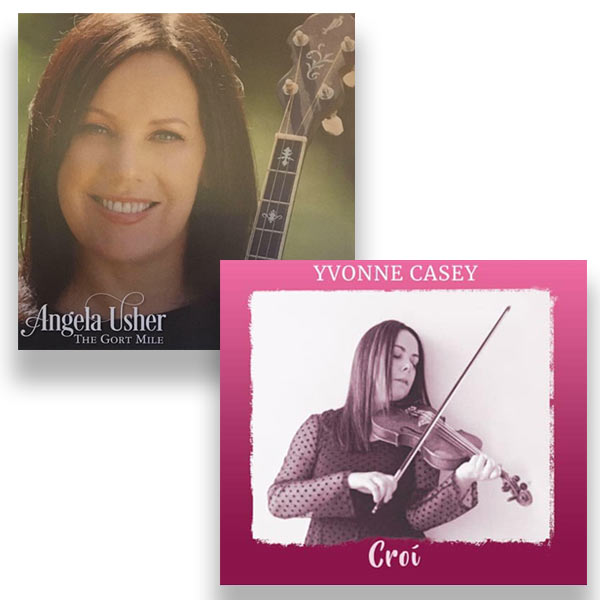 Music is Yvonne Casey’s life.
Yvonne is one of Co. Clare’s distinctive fiddle players. She grew up surrounded by the richness of Clare music and plays in a unique soulful style. Sitting in sessions from a very young age she discovered the joys of Doolin as a teen, where she met and played with legendary musicians such as Kevin Griffin and Eoin O’Neill. In the 1990’s the band The Ceili Bandits was formed, Yvonne recorded two CD’s with them and toured Europe and the U.S.A. She also recorded her first solo CD in 2004.

Since then Yvonne has created her own music school in Ennistymon, Co. Clare, and performs and teaches at various festivals at home and abroad. Her recent collaboration with Donegal accordion player Dermot Byrne is charming audiences with their fresh new sound. Yvonne recently released her second CD entitled “Croí’ which includes many of her own new compositions. A special treat for all music lovers!

Angela Usher, born in Manchester, is a well-known tenor banjo player, as well as an experienced teacher and composer of Irish music.

Angela learned the tin whistle from Marian Egan and soon progressed onto other instruments. By her mid teens, she joined her first band Curragh and was then a founder member of the popular Manchester Celtic rock group, Toss the Feathers.

In July this year, Angela released her debut solo banjo album ‘The Gort Mile.’ The album’s title is a reference to her origins; Angela’s Grandfather, John-Joe Lally, came from Peterswell and won the Gort Mile race in the early 1920’s. Angela spent her summers in Peterswell, frequently visiting the family home of celebrated box player Joe Cooley, playing tunes with Joe’s brother, Jack.

Described as a uniquely soulful banjo player, where technical mastery meets impeccable musical taste, Angela is at last sharing her considerable talents as a musician and composer with the wider world. Almost half of the tunes on the album are Angela’s own compositions.

“The Gort Mile is a rare and spirited collection from an outstanding musician and teacher. Cherish it.”
Mike Harding (Broadcaster and folk musician)