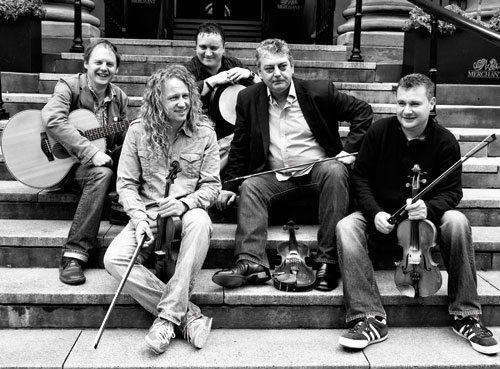 Take three iconic fiddle players – Cathal Hayden, Dezi Donnelly & Tola Custy, add a fantastic engine room – John Joe Kelly and Ed Boyd, and the results are one unique gig. This collaborative group is made up of five virtuosic musicians who individually have played with a host of bands including: Arcady, Four Men and a Dog, Mairtín O’Connor band, Toss the Feathers, Sharon Shannon Band, Michael McGoldrick band, Transatlantic Sessions, Calico, Guidewires, Flook and the Kate Rusby band to name but a few. Through their playing, these five extraordinary musicians have become ambassadors for traditional Irish music all over the world. Together they created a sound that is truly sublime. A real treat!

Cathal Hayden needs no introduction to anyone even remotely familiar with traditional Irish music. A multiple All-Ireland Championship winner, he achieved world-wide recognition as one of the founder members of Four Men and a Dog and also plays with the fantastic and highly innovative Máirtín O’Connor Band. With 3 acclaimed solo albums to his name, Cathal has rightfully earned his place as one of Ireland’s top fiddlers and his solo banjo performances are quite simply show-stopping.

The name of Custy is synonymous with Clare fiddle music, and the fiddle playing of Tóla Custy is one reason for that. An innovative and creative performer & composer, Tóla has played and recorded with a huge spread of musicians and groups from Calico and Flook to Mirella Murray, Padraig Rynne, Alan Kelly, Heidi Talbot, Pauline Scanlon & Gráda to name just a few. These names show the high respect at which Tóla is regarded by his fellow musicians.

Dezi Donnelly is a Manchester based Fiddle player. One of the founder members of the legendary ‘Toss the Feathers’ Dezi is also a regular member of both the Sharon Shannon and Mike McGoldrick bands. His only solo album to date, Familiar Footsteps is already recognised as one of the greatest traditional fiddle albums of all time and has won rave reviews. Dezi has also made appearances on BBC’s Transatlantic Sessions.

John Joe Kelly is one of the most sought-after bodhran players on the folk music scene today. A member of Flook and Mike McGoldrick bands among others, John Joe’s style is unique with his deep rhythms and funky variations. His playing has become legendary throughout the traditional scene and he is constantly expanding the boundaries of what beats and sounds you can get from one simple drum. In recent years he has been involved in many world music collaborative projects featuring musicians such as Tim O’Brien, Kate Rusby, Zakir Hussain and Dan Tyminski.
Jim Murray

Born into a musical family in County Cork, Jim’s early years were spent immersed in Irish music. In 1998, Jim began his professional career being invited to tour Japan and Australia with accordion legend Seamus Begley. In 1999 Jim was invited to become guitarist with world renowned Irish musician Sharon Shannon with whom he still works. Since Jim’s arrival on the world stage, he has gained the respect of both national and international musicians and has performed and recorded with artists such as Sinead O’Connor, Steve Earl, Shane McGowan, Altan and Mary Black to mention but a few.