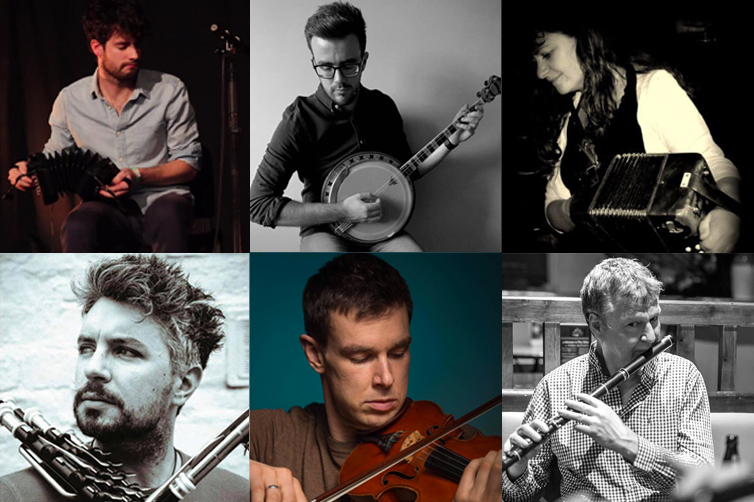 Cost of Instrument Classes per student: €20. Pay on the door.

PLEASE NOTE:
These classes are Not for beginners, and students must be at a basic intermediate level.

We are happy to announce that this year all our masterclasses are in conjunction with “Music Generation Clare”.

Classes will be held at above address.

“Music Generation Clare” is part of Ireland’s National Music Education Programme that transforms the lives of children and young people through access to high quality performance music education in their locality.

Through partnership, we create rich and diverse ways for participants to engage in vocal and instrumental tuition delivered by skilled professional musicians, across all musical genres and styles.

Limerick native Cillian King has been playing music from the age of 6 and is currently one of the most in demand multi-instrumentalists in Ireland today.

As well as being an accomplished concertina player, he is also proficient on guitars & keyboards and has toured the world with many acclaimed bands & artists.

While being a member of innovative bands such as Atlas, he has also toured with Ulaid & Duke Special, Aldoc, Ímar, Pauline Scanlon & Moxie.

2015 saw Notify release ‘InConcept’ who have since toured successfully throughout Ireland & Europe and in 2016 Cillian released ‘Affinity’ with his band Atlas in 2016 to critical acclaim.

George McAdam hails from Co. Monaghan and is a dedicated tutor and performer at many festivals and summer schools at home and abroad.

George is also a member of the Blackwater Céilí Band and recently released a debut album entitled “Music in the Valley”.

Josephine, originally from East Clare is a accordionist,multi-instrumentalist, composer and music teacher with a highly distinctive and personalised style – her playing being described as loose, free, spiritual, uplifting and flowing. Josephine has toured all over the world as a solo musician/teacher and also with her own band with one of the highlights being a musical collaboration with Niamh Parsons and Pat Marsh in 1999 for the St. Patrick’s Day celebrations on Capitol Hill.

She has recorded four albums including her latest release, Music in the Frame which includes nine of her own compositions and tunes from the Traditional canon.
Some of Josephine’s compositions such as Phyllis Birthday, Matthew’s Waltz, Anna Fox, etc., have featured on many albums over the years by bands such as Liadáin, Cherish the Ladies and Mick McGoldrick/John McSherry. Her latest compositions ‘Spideog’ (Planxty) and ‘The Coffee House’ (Slip Jig) were commissioned works by Music Network. Josephine is currently compiling a book of over 100 of her original compositions for release next year.

Hailing from County Armagh, Ireland, Jarlath Henderson is the first Irish solo artist to win the prestigious BBC Young Folk Musician of the Year Award, which has led to performances at festivals throughout Europe and to GlobalFest in New York City.

He’s three times ‘All-­­Ireland Champion’ Uilleann Piper, a teacher both in Ireland and Scotland and has featured in numerous BBC television programs on piping and music.

Liam O’Connor was born into a musical family in Dublin. His solo CD The Loom was voted Trad Album of the Year 2017 by the Irish Times. In September 2018 he was nominated for the Best Folk Instrumentalist RTÉ Radio 1 Folk Awards.

2018 saw the launch of a project called Re-creating P.W. Joyce: from 19th century manuscripts to an interactive online audio-visual resource which was conducted in partnership with the Irish Traditional Music Archive. He has performed with some of the leading traditional musicians of his time including Liam O’Flynn, Noel Hill, Tony MacMahon, Sean McKeon and Cormac Begley. In August 2019, he was appointed Director of the Irish Traditional Music Archive.

Paul McGrattan was born in Dublin in 1967. He began playing the flute at the age of 10 and received his first lessons from Paddy Treacy, a great flute player living in Dublin but originally from Kilconnell, Co. Galway. Paul’s native parish of Navan Road was a hotbed of flute and whistle players and he was fortunate to receive lessons, guidance and friendship from players such as John Egan (Riverstown, Co Sligo), Paddy Bán Ó Broin (Dublin) and Chieftain’s founder member Seán Potts.

Paul has taught at the Scoil Samhradh Willie Clancy and Scoil Acla (Achill Island) for many years, and has also taught workshops throughout Europe and the U.S. He is a teacher in Ballyfermot College Of Further Education in Dublin where he co-ordinates the college’s Higher National Diploma in Traditional Music Performance and Instrument Making.